mobiLead, 2014 Red Herring Europe winner, today announced that it has been selected as a candidate for Red Herring’s 2014 Top 100 Global award, a prestigious recognition honoring the year’s most audacious and far-reaching private technology companies and entrepreneurs from across the globe. 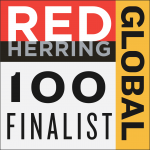 The Red Herring editorial team selected the companies demonstrating the most innovative technologies and business models originating from over 1,000 companies from more than 40 nations. These companies, representing past Red Herring Asia, Europe and North America awards, are judged on a range of qualitative and quantitative metrics, including but not limited to, technology innovation, financial performance, growth criterion, management’s execution standards, potential globalization of the strategy, and market share improvement.

“Technology companies are becoming the bright spot in the economic outlook based on their increasing role within macro-economic environments,” stated Alex Vieux, Red Herring chairman. “2014 has demonstrated the sector’s vibrant activity and its contribution to the global economic recovery. An unprecedented number of entrepreneurs are jumping ahead of the competition and making a difference. Constant breakthroughs make recent developments obsolete faster than ever before.
mobiLead is performing exceptionally well in its field and strongly deserves to be singled out as one of the Red Herring Global finalists. At this stage, we are left with the daunting task to select the best qualified companies for the 2014 Top 100 Global Award.”

About mobiLead
mobiLead, an Internet of Things enabler, develops and operates an exclusive NFC and QR Code tag management platform that makes linking upwards of billions of individual manufactured objects, products packaging, and documents to value added online services cost effective and secure.
In 2014, this disruptive startup company was selected by France Brevets, an investment fund dedicated to international patent licensing, for its outstanding innovations in the Internet of Things field, enabling the management of billion of unique identifiers.
mobiLead is an expert group leader on NFC, QR Code and the Internet of Things (IoT) at AFNOR, member of ISO. mobiLead is an expert on NFC, QR Code and the Web of Things (WoT) at the World Wide Web Consortium (W3C), and participates in several GS1 Working Groups.

About Red Herring
Red Herring is a global media company that unites the world’s best high-technology innovators, venture investors and business decision-makers in a variety of forums, including print, online and exclusive events worldwide. Red Herring provides an insider’s access to the global innovation economy, identifying new and innovative technology companies and entrepreneurs. Its Red Herring 100 awards for North America, Europe, Asia and Global have recognized more than 5,000 companies in their early stages, including Baidu, Google, eBay and Skype.